What does it mean to be a centrist amidst today's partisan brawling? 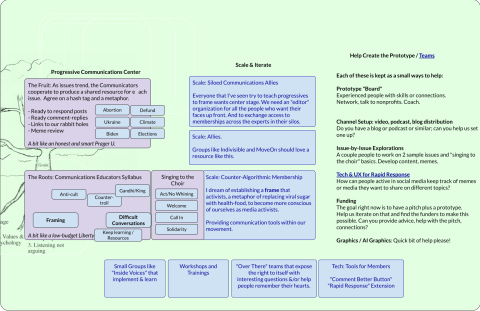 An awful lot of us are pissed off at partisanship coming from politicians — and our friends.

What does it mean to be a centrist? Are you roadkill on the yellow line, getting nothing done? Equivocators who think every party at every time in history is equally half-bad, unable to discern? Should you be pissed at the partisans? Do you make it your job, while conservatives should be balancing the budget and providing for the common defense, and liberals are looking out for people who have more than their share of struggles, to hold the center, to hold the country balanced and demand fair play? To call out lies and corruption, to actively hold the center and punish politicians who bring in the swamp?

Personally, I'm frustrated with the centrist movement, overall, in the US, who I think have been AWOL. Overall, too many people are playing false-equivalence games, instead of calling out each civility-rule-breaker proportional to how much they break the rules.

Centrists are needed to hold the center: to get pissed when one party gerrymanders or pushes real voters off the rolls, to stand against that, to block it from the center. To have an idea of what is going on in DC and state capitals, so they can call bullshit. Not to get their news from facebook and have even-sized lists of indiscretions from both sides. To know which Democrats lie often and which don't, and which Republicans lie often and which don't, and hold them to the same yardstick, whether it turns out the one party lies more than the other or not — "false equivalency" leaves centrism spineless and powerless.

If you are not furious at Wall Street money, that's not centrism, that's corruption.

If you are not as upset at racism or sexism as the left, that's not centrism, that is a failing.

Are you a fan of the center: who are the centrist equivalents to McCain or Sanders? They both held strong views but nonetheless were generally respectful to their opponents. Meanwhile many who claim to be centrist sell out to Wall Street as badly as any on the edges.

The Two Centers: What is the third way between left and right?

There are really two “third way”s between left and right — which we don't yet have words to differentiate.

One way is to be a total corporate and Wall Street stooge. The “swamp” that Trump talks about (and so far hasn’t cleared) is clearly a “third way” between people like Sanders and McCain who had strong views and an ability to work together. There are a whole lot of politicians who stand up against people like Sanders and McCain, who prevent campaign finance reform so that money can rule from the center. This “third way” often enjoys the wedge issues: we all fight about immigration or abortion or guns, while Wall Street wins quietly in the background.

Another “third way” would be to stand strong: to call a lie a lie whether it came from left and right, to work against gerrymandering, to be furious when voters are kicked off the voter rolls. Is that you? A movement here would try to drain the swamp while encouraging us not to hate each other over different views on abortion or guns even if we strongly disagree. A strong center, that stands against corruption and subversion of democracy, while encouraging active listening and breathing room on social issues where ordinary, non-corrupt people simply disagree.

That second “third way” barely exists today. Gerrymandering and election manipulation are particularly vital: without gerrymandering, many more seats would be centrist. People volunteer on the left and on the right: there’s nothing stopping a million centrists from demanding an end to gerrymandering. Get organized, make it happen.

Communication Techniques for Talking with the Center

For progressives, the holidays can be a trap: if you get angry at a trolling angry uncle, all your relatives see two partisans in conflict. Conflict triggers the amygdala, triggers defensiveness, reduces the sense of hope and community — in other words, the family conflict itself is going to push listeners to circle-the-wagons conservatism, going to convince young relatives to stay the hell out of politics. Progressives thrive on hope. How do you get there while being trolled?

A couple of key tactics to consider:

Are you a Bedrock Centrist, or a Floater Centrist? Do you hold to your values, get active in supporting the center, or just float between the parties no matter what they do?

I think we should be asking rhetorically — it's too aggressive a question for one-to-one openings, Radical Conversation Cycle style, but a good question to float where everyone will want to answer to themselves "I'm a Bedrock Centrist."