Framing that helps the Refugees

One of my relatives was a Jew on the very last boat out of Europe. The xenophobia rampant today would have handed him to the Nazis; it handed other innocent people to the Nazis, and wants to push innocent people fleeing ISIS back under their control. There is a tragedy going on today. And we who care are spreading a lot of funny, cynical, often quite true Facebook memes...

I'd like to create a version of this first post that is aimed at the audience it should be aimed at, rather than just insulting them:

How would you word this, to reach the Pro-Life people who are true to their values, instead of insulting the ones who aren't (and really, obviously meaning to insult them all)? This blog is a draft for friends -- share your ideas with me, help me figure out which of these short phrases ring true or make changes. 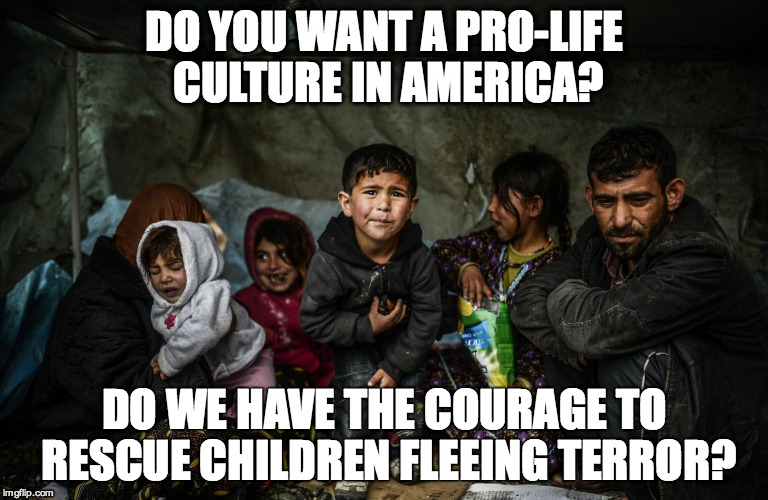 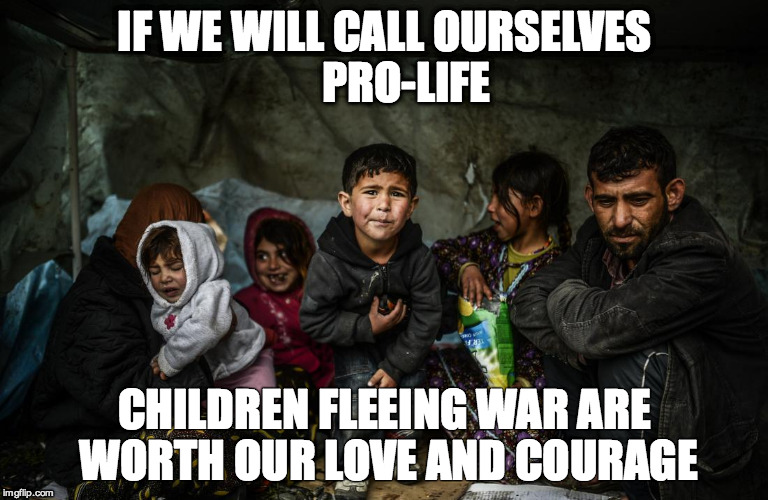 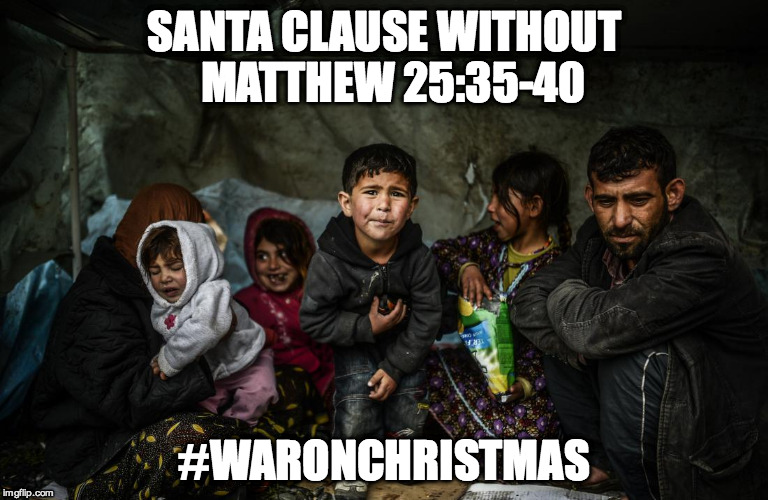 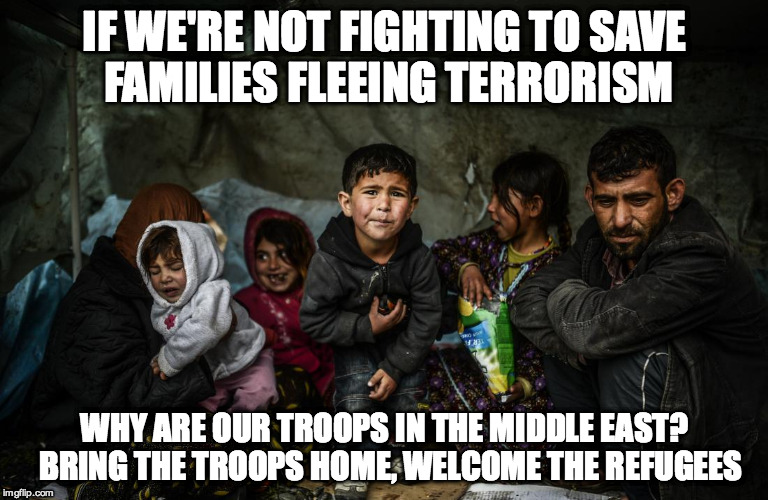 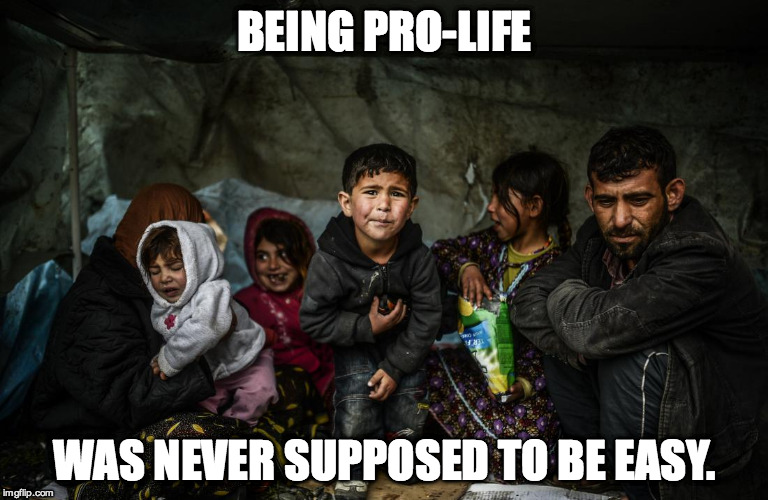 Additional Resources / This blog is currently a draft for friends feedback

... Facebook memes that get a laugh inside our bubbles, but don't swing people who might be swung to help the refugees.

Articles Worth Sharing, In General

Anne Frank was denied entrance to the US

Cut these ideas into tweets

Are refugees fleeing terrorists more important than our usual bicker-battle between liberals and conservatives. They are to me. I want America to be courageous. Stand up to ISIS.

If anyone sees these stories posted with integrity in more clearly conservative media I'd like to spread those especially.

"In Syria I learned that Islamic State longs to provoke retaliation. We should not fall into the trap." Nicolas Hénin was a hostage of ISIS.
I was held hostage by Isis. They fear our unity more than our airstrikes

It's helpful to gather positive materials for different communities. A lot of what I've read coming from my roots in the Jewish community have been heartening, helps to spread the positive: Moved by moral imperative, Canadian synagogues sponsor Syrian refugees

Liberals Should Knock Off the Mockery by Kevin Drum seems obvious to me, but we're not listening, so here's a link.

My initial thoughts that became this blog:
There are statements: "This isn't a crime, this isn't mere terrorism, this is war." (here) And policy goals: "This successful violence means the US should no longer accept the people fleeing from ISIS." These are, with just slight differences in wording, the statements and goals of certain Republican leaders and Daesh. I wonder if there is a way to frame this so that honorable conservatives, the people who believe that the US in WWII was the "Greatest Generation," would reject these cowards? How do we move out of a world where the Republicans and Democrats auto-oppose each other?

It appears that the Vatican Ambassador to the US, Carlo Maria Vigano, played sneaky politics with the Pope's visit, getting Kim Davis near enough to the Pope that her team could imply Papal support.

The allegation is he used the Pope as a pawn for his political views, using him to rally conservative-minded Catholics to place their religion in the service of politics.

What is the best way to frame to frame a conservative abuse of the Pope's political neutrality? How should progressives frame a compassionate Pope?

Groups such as Faithful America are going after him, aiming to gather thousands on the left to sign petitions to demand his resignation.

Conservatives and liberals have used mirror-image frames: the Pope is here to be a pawn in our politics.

I'm curious and a bit skeptical if having a left-oriented group yell at the right-wingers is actually productive or helpful in this case. Both the papal ambassador and internet-petitions for him to resign are playing games of politics, where everyone just lines up on their usual side, and no one learns much of anything. The ambassador's actions were manipulative of the church -- he didn't violate the trust of "the left," he hurt the trying-to-be-religious-not-political Pope and Vatican. But the more progressives join the circus and act like we are the aggrieved party, the more we let him off the hook he stuck himself on.

Conservatives are framing an us-them culture war. Do we frame it as them-us, or something else?

I think we've both mis-read and mis-framed this Pope: he's not being political and "taking our side," he's expressing a lot of the good parts of the Bible and Jesus' teaching. The right-wing wants to call it politics, the right wing wants the church to serve their politics, but it isn't politics and it's not healthy for it be politics. Politics and religion don't mix well, we should be trying to de-politicize religion, not suck it into the "he should resign" world of petitions. Progressive groups like Faithful America might want to make this visible so people simply see what actually happened, without us making it about us: the Ambassador played the Pope. Let them figure out if he should resign. We should be an echo-chamber for honest Catholics who did not want the Pope's visit politicized, not cheerleaders for our side of a political game.

Who are we trying to influence? What are our goals?

If you want Carlo Maria Vigano out of power, push that he abuses his power, not that he is conservative. Allow him to be removed from the center for betraying the Pope's trust. And when we have the microphone, let's get back to our values.

If our goal is to see a power-shift in the Catholic church hierarchy, then we should let conservatives overplay their hand: the effective frame is that they play politics with the church, not that this is an actual political left-vs-right issue where the church should seek the center.

If our goal is to influence average Catholics -- people who don't primarily identify as "red" or "blue" but "Catholic" or "Christian" -- to be more compassionate because this Pope is, then again we need to let the Pope's words speak for him, and every time we push liberal politics into a message of compassion, we politicize what should be not in dispute. We make it us-vs-them, where neutrality is between liberal and conservative. What if we joined and amplified, rather than led, other voices that want to keep the church clean of politics? Conservatives seem to think that their base would dwindle if the church message was not politicized, edgy and angry: would ours too?

Dumping the church into a world of where progressives are signing the same petitions we aim at Congress seems like a bad habit, a political instinct to turn everything into the same crappy politics we've gotten used to playing, even when we don't have to, even when it backfires.

Last thought: this isn't a call for being quiet and letting Kim Davis & her allies get away with dishonest political theater. The initial outrage was appropriate, and drew this into the public sphere where people would notice it. It's the switch from exposing a dirty trick, to demanding that a specific person be removed from office, to using political-style pressure tactics, that will force people to take our side in order to do what a politically-neutral person might do anyway. Humor and mocking of Vigano and Davis would be fine; lining up thousands of liberal signatures on a petition neutralizes the charge they they are playing politics where no one should.

The Missing Wave of Reform

Robert Reich looks at why there is no revolution or massive progressive reform in the US.  I think this is a great list of large, systemic problems weighted against active progressive politics. But it's also missing what we're missing: chickening out on describing where liberals are failing when we could perhaps be succeeding.

Economic elites win when they create a sense of separation between ordinary people. We no longer divide according to "all politics is local," where we fight for our district, or for our economic class. Instead we separate by our psychology into groups that feel good together. One of the biggest issues has been the success of conservatives in pulling the proud, working poor into their camp: Democrats do not give underpaid workers dignity in our rhetoric.

The left used to proclaim that "all value is created by labor," and now we proclaim that Walmart workers are abused and mistreated -- it's economically true, but sounds like we're talking about a sad puppy. The Republicans offer these people pride and hope: "I believe you are strong enough to succeed without charity." Working people -- who do the real tasks we most need done -- have pride, and the Republicans have offered them pride (even as their policies guarantee workers will be deeply underpaid) while the Democrats have offered them pity (and a somewhat better paycheck). We need to recognize the value of core work (making stuff, not shifting stocks) and demand that real working people are paid fairly, rather than offered aid. Walmart workers are underpaid for working hard: when we want to rectify that they don't receive a fair day's pay for a fair day's work it is about preventing theft, not about charity.

As we consider launching missiles into Syria, perhaps sacrificing American troops in another Middle East war, perhaps letting the world see chemical weapons get used successfully without repercussions, there aren't easy answers.  But one thing we can do, one thing we owe the Syrian civilians and US troops, is to engage in a serious conversation that is about the real situation in Syria and not just our political habits -- not fall into habitual liberal and conservative patterns.

Without suggesting a particular course of action, what would improve the debate?

In recent years the US has divided, and built up filter bubbles, between Democrat-liberal and Republican-conservative. The policies of both parties might not be that terribly far apart ... the policies of both parties would be right-wing and far-right-wing in France, both working for the same corporate donors ... but that hasn't stopped them from creating a frame of liberal vs conservative that most non-politicians at home have adopted. On issue after issue, if Obama and his supporters are for it, Republicans are against it, and people with no direct stake in partisan politics choose teams anyway.

Syria scrambles that frame. We've divided into isolationist and interventionist right across party lines. If we're going to use framing to improve the debates in this country -- and right now a better discussion on Syria is the best thing I can think of since I don't have an "answer" for what to do -- let's consciously pull ourselves out of our habitual left-right frame. We don't need politicians to lead on this: ask your friends if they identify as isolationist or interventionist. Get people who spend all their time in one pair of groups to pair up differently. At a minimum this can help break down the liberal-conservative groupings that are so overused, and that so easily become a cover for special interests. Ideally if we group and re-group differently on each issue than people will stop identifying so deeply with any partisan grouping.

Gandhi saw apathy in the face of evil as worse than violent resistant.   If we want to get our nation on the side of peace, we can't just turn to this moment's war weariness, we have to get better at engaging people's fears that are driving them to support war.  And in Syria, there are a lot of valid, honest reasons to use -- and a huge number of reasons to at least threaten to use -- military force.  Recognizing that -- being better able to articulate the reasons for war than people who actually support war -- doesn't mean declaring that the military-force side of the balance has more weight than the reasons not to get involved.  Yes there are real and desperate reasons to get involved in Syria; yes our government has led us to intervene in disastrous ways in recent years.